Almost as soon as the closing notes of Things Change had faded, Steven and I were back in the studio eager to write an even more epic set of songs than those heard on Flowermouth. 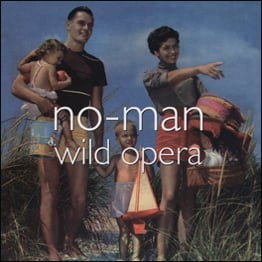 The two main pieces that emerged were Love You To Bits (the almost legendary 20 minute ‘disco symphony’) and Song About The Heart (a short ballad, which quickly evolved into the far grander and far longer, Lighthouse).

By the middle of 1994, we’d written around 35 minutes of material, but an abrupt about face resulted in the more spontaneous sessions that produced Wild Opera and Dry Cleaning Ray.

I’d just finished the understated Flame with Richard Barbieri and Steven had recently completed Porcupine Tree‘s melodic and monumental, The Sky Moves Sideways. Feeling a need to distance ourselves from the gloss and control exhibited on those albums, we decided to abandon the songs we’d been working on for the previous six months.

Initially, we set about writing, recording and completing pieces in an hour. Immersing ourselves in ideas and losing ourselves in the moment, there was little time for self-reflection. For me, with his ‘Industrial’ approach to a lot of the guitar and bass parts on the album, Steven harked back to No-Man’s earliest ‘noise experiments’ (Screaming Head Eternal etc), while taking the band’s sound to some altogether stranger and uncharted places.

We often started with particular samples we’d brought in, or with abstract Eno-esque Oblique Strategies style concepts. In the case of Infant Phenomenon we started from a position of imagining what the White Album-era Beatles would have sounded like in the age of sampling. In the cases of Sinister Jazz and Urban Disco, the titles themselves acted as creative starting points, while Libertine Libretto was an imagined 21st Century hybrid of avant-jazz and lo-fi styles featuring a lyric inspired by a recent trip to New York.

We worked at a frenetic pace from the Autumn of 1994 through to the Spring of 1995, quickly amassing over an album’s worth of material.

Some of the pieces remained in their ‘hourlong’ states, while others suggested more possibilities and were worked on further (my two favourites, Pretty Genius and My Revenge On Seattle, amongst them).

One of the only pre-composed pieces, the ballad Taste My Dream, was a song I wrote for the Flame album (a demo still exists of the Barbieri/Bowness version). Although it was scheduled to appear on the more orthodox Flowermouth follow-up we were originally intending to release, we included Taste My Dream on Wild Opera in a last-minute attempt to soften the album’s harsh edges. In retrospect, along with My Revenge On Seattle, I feel that it more properly fits with the style we later established on albums like Returning Jesus.

At the time, I described Wild Opera as being, ‘music on the move’. I wrote the lyrics in the studio as we were completing the ‘hourlongs’, or on the back of tickets on tube journeys home from the sessions. If Flowermouth was gleefully oblivious to fashion, on a purely instinctive level, Wild Opera was the sound of No-Man heeding the musical signs of the times. Echoes of the dominant Trip Hop and Brit Pop movements filtered through as did Lo-Fi production values and a newly acquired strain of dark humour. We still sounded like No-Man, but this was the band reflected in a distorting hall of mirrors.

In some ways, our disillusionment with how we’d been treated over Flowermouth influenced several of the lyrics on Wild Opera. The album was awash with descriptions of casualties of fame and casualties of the pursuit of fame. We’d lost most of the contracts we’d had and were also witness to some strange and desperate scenes on the fringes of the ‘music biz’. Perhaps unsurprisingly, many of the songs contained a sense of hurt and a morbid fascination with the flipside of success.

One Little Indian were unsure about Wild Opera, but still issued promotional copies of the album in late 1995. Sensing the label’s indifference, we jumped ship before we were pushed and signed with the smaller, but more enthusiastic, Third Stone Records (whose back catalogue of Spacemen 3 and Bark Psychosis seemed more appropriate to what we were doing at the time).

After the praise heaped on Flowermouth, the responses to both the new single, Housewives Hooked On Heroin, and the album were considerably more mixed. Melody Maker‘s pithy, ‘Best title of the week, worst single of the year,’ review, was countered by Single Of The Fortnight in Ireland’s main music magazine, Hot Press, and airplay on Dave Fanning‘s influential RTE show.

From the band’s perspective, the Wild Opera sessions represented an enjoyable, frantic and necessary rush of activity that left us more able to pursue the grander concepts expressed on Returning Jesus. Having smashed the ornate facade of Flowermouth, this was the start of building something beautiful from the rubble.

Listen to My Revenge On Seattle from Wild Opera © no-man