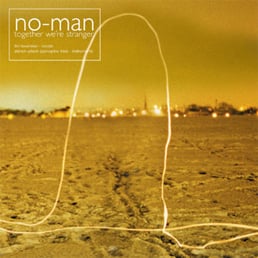 Boosted by the positive response to Returning Jesus and excited at the new directions some of the album’s songs suggested, in early 2002, No- Man started work on what turned out to be the most deeply personal and most quickly realised album in the band’s history.

Only Rain, Returning Jesus and Slow It All Down hinted at a more spacious and textured approach that Steven and I felt could be taken considerably further, while the desire to work in a stripped-down singer-songwriter territory also loomed large in our thoughts.

This time round, with little debate and consultation, we both had a very strong and united idea of how the next No-Man album should sound.

Together We’re Stranger‘s 9 minute title track started life as a demo that Steven had sent me in the late 1990s. At the time, I liked it a lot, but couldn’t quite see what I could do with the piece. In early 2002, on re-listening, something clicked and I immediately wrote lyrics and a melody to it. I had some ideas regarding arrangement and within a few days gathered several musicians in Stephen Bennett‘s suitably dim-lit attic studio. What came out was a 20 minute version of the song featuring some stunning Mike Bearpark lead guitar and evocative Peter Chilvers treated bass (both of which remained on the final recording), as well as some looped vocals and lyrical Stephen Bennett synth lines. Excited by the results, I sent the track to Steven only to find that the demo I’d originally been given had subsequently been released as the very lovely Bass Communion track, Drugged. After initially being a little perplexed by what I’d sent him, Steven soon came round to feeling that this was an ideal starting point for the more atmospheric successor to Returning Jesus that we’d been planning.

From this point on, things moved quickly. A couple of Nomansland recording sessions later and we had a truncated, more tightly arranged version of Together We’re Stranger, in addition to All The Blue Changes, The City In A Hundred Ways and, perhaps my favourite No-Man song of all, Things I Want To Tell You. From the beginning, we had the idea that all four pieces would become component parts of a larger composition, or a linked suite of songs.

The Drugged/TWS in miniature, Bluecoda, was also conceived around this time and, before being dropped, was envisaged as either the closing part of the, by now, nearly 30 minute suite of songs that started the album, or of the album itself.

Soon after, we wrote a trio of predominantly guitar based songs, which provided a noticeable sonic contrast to what had gone before. If the suite possessed an opulent and seductive Ambient/Electronica/Chamber Jazz sound palette, these songs probably had more in common with the raw early 1970s solo recordings of ex-Beatles, John Lennon, Paul McCartney and George Harrison.

The writing of Back When You Were Beautiful, as with Carolina Skeletons and Wherever There Is Light, was one of those wonderful experiences when the two of us, idly trading musical ideas in real time, managed to produce a lasting, concrete result almost instantly.

Photographs in Black And White, a semi-autobiographical account of my time in London, developed from an acoustic protest ballad into a blissed-out wall of noise. The song, which to me felt like a definite No-Man career highlight, seemed to evoke aspects of Post-Rock’s immersion in sound, Progressive Rock’s sophistication and the intimacy of the confessional singer-songwriter. For the coda, Steven’s powerful, rising ‘one note’ guitar solo sailed over constantly shifting clarinet lines and ever louder bass pedal root notes. In some ways, it resembled a more organic refinement of the dynamic climaxes of earlier No-Man pieces such as Simple and Things Change. For me, as with the album as a whole, Photographs in Black And White appeared to pull off the feat of being simultaneously both understated and epic.

As the recent Mixtaped/Returning DVD suggests, I wrote the lyrics to Together We’re Stranger during an emotional time.

My father had recently suffered from two mini-strokes and a very long-term relationship had finally come to a whimpering end. The attendant feelings of loss and fear evoked the memories of my mid-teenage experiences of my mother being killed in a car crash and the family problems that ensued. A sense of introspection, reflection and melancholy pervaded the songs, all of which dealt with coping with the death of ‘something’, whether that be love, youth, freedom, or possibilities.

Things I Want to Tell You was my favourite of the lyrics, because it seemed to state quite complex and personal emotions in a simple and ambiguous way. The inspiration partly came from my days working with the elderly ‘mentally and physically infirm’. I often tried to imagine the thought processes and past lives of the people I dealt with (in sometimes dehumanising and undignified ways). The barely sentient man who was receiving his daily bed bath had loved, lost and dreamed, and the family photographs on his walls undoubtedly had once meant something important. It seemed tragic to me that all this individual emotional history was fading or lost, trapped inside a malfunctioning brain, forever incapable of being properly expressed. 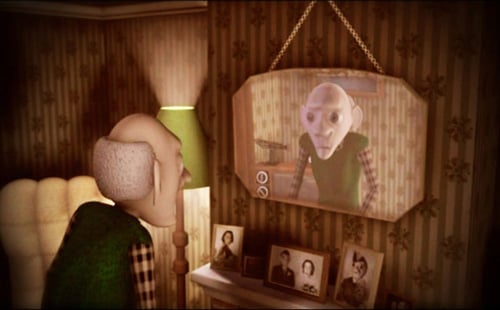 Still from Neil Whitman's video for "Back When You Were Beautiful"

Another inspiration behind the album was my feeling that some of us fail to appreciate what’s good in our lives when it’s actually there: Foolishly, retrospective love can sometimes be more intensely revealed than current emotions and hopes. That sense that we sometimes forget to fully live in the present moment haunted several of the songs.

If the opening 28 minute suite of songs vaguely sketched aspects of the compromise/strangeness of togetherness, relationship loss, and death-bed isolation and regret, the remaining three pieces were more akin to short stories in song.

Photographs in Black And White and The Break-Up For Real were fictions drawn from facts, while Back When You Were Beautiful had its origins in a bizarre incident when I was locked in a Thornton’s Chocolate shop with an all-drunk, half-mad tramp. His constantly repeating mantra of, “I write songs. Great songs. Songs you people will never understand” clearly made an impression.

Although the subject matter was bleak, I hoped that there was a redemptive quality in the sometimes blissful nature of the music itself. In other words, life could be shit, but it was never pointless.

Beyond the opening track’s mini-guestfest and the most reverend Roger Eno‘s appearance (which comprised Roger playing passionately on a 19th century harmonium, while thunderstorms raged outside, visible through the studio skylight), the album’s main featured collaborators were David Picking and Ben (son of Roy) Castle.

Both Ben and David contributed a great deal to the feel and overall sound of the album, with Ben’s clarinet playing becoming a significant part of the album’s identity and David’s beautifully measured percussion, trumpet and electronic additions lending an unpredictable edge to the music.

More so than with any album outside of Speak and Wild Opera, Together We’re Stranger‘s songs seemed complete pretty much instantly. A lot of additions (including David providing drums on The Break-Up For Real and drums and electronic pulses on Photographs in Black And White and All the Blue Changes) were left unused as we felt that what was there already was as right as it would ever be.

Although the album contained traces of some of the music we both had been influenced by*, Together We’re Stranger felt like something very pure and very personal. Its combination of heavily processed and natural sounds, intimate emotions and epic structures sounded more right than anything we’d previously done and we both believed it would be a difficult statement to surpass.

Carl Glover‘s excellent artwork was taken on Blackheath common in the Winter of 2002/2003. His abstract light sculpture depiction of a couple adrift, connected yet apart, in a desolate, snowy landscape seemed to perfectly capture the spirit of the album’s contents. 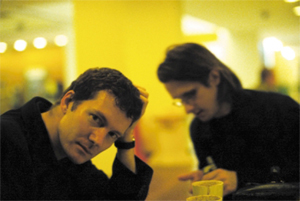 The almost casual band photo – one of Carl’s best, I think – was taken at the South Bank in London.

Years after its release, the album remains important to me. Although Schoolyard Ghosts and Returning Jesus may contain individually stronger songs and lyrics, I think Together We’re Stranger possesses an emotional, musical and conceptual unity that might ultimately prove more potent than either.

Like the emotional states it chronicles, it was an album that took time to get over. 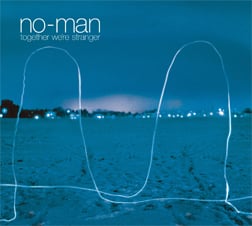