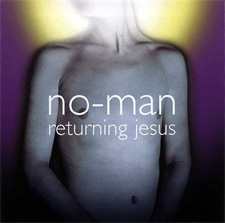 On and (mostly) off, no-man’s 2001 release Returning Jesus came together over a period of thirteen years.

Galvanised by writing the Carolina Skeletons EP in 1998 and recording Speak in 1999, the last three years of the process were spent fine-tuning the track order and artistic direction, finding the right musicians for certain tracks, and approving final mixes.

At various points, Steven and I had agreed on a 35 minute version of the album – comprising the more introspective and epic material – and a 70 minute version, which included everything we’d recorded during the album sessions. At one point, we considered using spoken linking sections that echoed aspects of the lyrics.

In the end, we settled on a 52 minute collection that we felt represented the most coherent album statement. Favourite and fully developed songs, such as Chelsea Cap, Something Falls and Darkroom, were consigned to b-side status, but we strongly believed the resulting album benefited from the ruthless edits and the focus on sequencing and flow rather than quantity.

The album’s lengthy gestation may have gained us junior level entry into the Mark Hollis School Of Eternal Waiting, but luckily the debating and nit-picking paid off as Returning Jesus ended up generating some of the most positive reactions of the band’s career.

More so than on any other no-man album, material came from anyone and anywhere and was completed in any way that worked best for the album. Though the majority of the album’s material was written between 1996 and 1999, it also came from any time as it spanned the band’s entire existence up to that point.

Close Your Eyes had its origins in a song called Desert Heart written in 1988. We’d always liked the song’s verse melodies and dramatic coda, but felt that it could have been developed into something more substantial. The track came back into focus for us while we were resurrecting the Speak-era material in 1999. Lyrics were changed, choruses and middle eights were written, and Ian Dixon, Steve Jansen and Colin Edwin provided some inspired instrumental additions. Melancholy yet uplifting, the lyrics are vague, but the feelings the song evokes in me are vivid. The piece was performed on the 2012 no-man tour and was a highlight for both band members and audiences. Though the song is structured, it allows a lot of room for interpretation and improvisation, so it’s never performed the same way twice. Nearly three decades after it was written, Close Your Eyes still feels like an ongoing work in progress.

Lighthouse evolved in a more convoluted way. The piece started off in 1994 with a guitar sketch that I played to Steven. This developed into the intimate Song About The Heart, but within the week had become the basis for the far more ambitious Lighthouse. At this stage, all rhythms were drum machine generated and the mid-section was longer and less complicated than it would become. The highlight for me – omitted from future versions – was an elongated Classical Minimalist section featuring layered vocals playing both with and against the keyboard pulses. At the time we’d written it, we viewed the song as an Angel Gets Caught In The Beauty Trap style centrepiece for a logical follow-up to Flowermouth, but this idea was abandoned when the more aggressive Wild Opera material started to dominate subsequent recording sessions. Lighthouse was approached anew in 2000 and, with the addition of Steve Jansen’s drums and a real Hammond organ, took on a totally different character. Steven wrote an even more complex mid-section and an atmospheric interlude was also added. During the latter sequence, I wanted to hear some furious ‘Free Jazz’ drumming constantly shifting beneath the rigid, stately chords. After initially sounding unsure about the idea, fuelled by absurd insults, the mighty Steve Jansen managed to come up with a very fine line in controlled chaos. A weird fusion of Soul-tinged love song, Minimalist middle eight and Classic Rock finale, in some ways Lighthouse unintentionally reinvented the Progressive Rock wheel. As the old saying goes, you can take the man out of the Prog, but you can’t take the Prog out of the man.

Only Rain’s history was a little less complex, but not by much. The piece emerged out of an idea I had for 1995’s Flowermix album. I was working with David Kosten (Faultline, Bat For Lashes, Everything Everything etc) at the time and suggested that we develop and extend the string coda to Watching Over Me further and turn it into something complete in itself. I was never a great fan of Dance remixes, so I thought it might be interesting to bypass the typical drum-heavy remix approach. I imagined a serene cross between Arvo Part’s Cantus In Memory Of Benjamin Britten and Miles Davis’s Sketches Of Spain. David, plus the legendary trumpet player Ian Carr, helped me realise this vision and Only Rain was born. The song was scheduled to appear on the debut Faultline album, but for various reasons this was looking less and less likely as the time of the album’s release drew nearer. Wanting to rescue a piece I really liked from potential oblivion, I suggested to Steven that it would make a perfect introduction to the no-man album we were working on. Steven agreed and set to work on enhancing the Faultline version of the piece. Colin Edwin’s warm double bass was added to underpin the existing trumpet part and Steven used some abstract Ben Christophers’ guitar fragments to great effect. The lyric’s evocation of a relationship in stasis echoed the feel and style of much of the rest of Returning Jesus and once completed it was inconceivable that the track had ever been intended for anything other than the album it ended up on.

All That You Are was a gently self-questioning 6/4 time Rock’n’Roll ballad I’d written and given to Steven to arrange, while Slow It All Down was an evocative Steven penned instrumental that he allowed me to tinker with in terms of the arrangement.

The original backing track for No Defence was sent to me when I was living in Manchester in less than ideal circumstances. The lyrics and melody were a heartfelt response to a genuinely worrying time for me and included one of the rare moments of obvious humour in a no-man song (now starts the ’spot the joke’ competition!). Not quite Don’t Eat The Yellow Snow, I grant you, but Zappa might have approved regardless.

Co-written in the studio in real time with Steven, for me, Carolina Skeletons and Outside The Machine rank as two of the no-man’s best and most accomplished piano led ballads. Outside The Machine was written as an abstract way of emotionally dealing with situations I’d experienced during the last months of my time living in London (the title derived from a wholly unrelated and wonderful short story by Jean Rhys), while Carolina Skeletons was an even more abstract piece dealing with the inevitability of time and events slipping away.

The title track – the most subdued piece on the album – was possibly the most important song on Returning Jesus. Lyrically, in terms of what I do anyway, it was the ultimate in trying to express as much as I could with as few words as possible. In some ways, a metaphor for the album, the band and where I felt I was at the time of writing, the lyric attempted to convey the sense of loneliness and desperation that pursuing uncompromising approaches in life can sometimes lead to. Lurking in the background was the less than original notion of what would happen to a real prophet in the age of Dale’s Supermarket Sweep. Musically, Steven’s atmospheric ‘Gamelan Electronica’ backing was a great match for the lyric and the intense final section remains one of my favourite no-man moments. Along with Only Rain, the suspended ‘slowness’ and exotic soundscapes of Returning Jesus planted the seeds for Together We’re Stranger.

Although most of the music was recorded at Nomansland between 1994 and 2000, overdubs took place at Foel Studio in Wales in the Autumn of 2000.

Steve Jansen’s drums were recorded at Foel as were the wonderful organ parts (on a specially hired in Hammond B3 with Leslie cabinet). Dave Anderson (Hawkwind, Amon Duul) was an entertaining engineer/host/studio manager and the idyllic rural setting was inspirational, providing an ideal place to put what we’d done in perspective.

Of special interest to me and Steven was that this was the studio where Peter Hammill had recorded his brilliant and highly personal solo album Over and where he’d posed for the cover photograph. As we soon realised, while comically failing to recreate his pose, this was a photo only made possible by Mr Hammill’s considerable height!

One abiding memory is of the two of us sitting in Steven’s car as the sun was going down and repeatedly playing Fairport Convention’s Sloth. The song’s relentlessly dark ending and raw but compelling mix became addictive to us. Although it’s a song that has no bearing or influence (that I can hear) on the music of Returning Jesus, it’s the one I most associate with the making of the album.

The truth was that no-one was eagerly awaiting a new no-man album in 2001.

The sales of Wild Opera and Dry Cleaning Ray had been far lesser than those for Flowermouth, and the Carolina Skeletons EP in 1998 (which I considered to be the best thing we’d done up to that point) generated the fewest reviews and sales we’d ever had.

Elsewhere, Porcupine Tree’s star was justifiably rising. Steven was more often than not on tour, and I was regularly gigging with Peter Chilvers and Samuel Smiles (including performing a few memorable Porcupine Tree supports).

In that we wanted it to be a definitive and honest no-man release, Steven and I treated Returning Jesus as if it was the last thing we’d ever do together. Our hopes for its success were minimal, but we were determined that the finished album be as good as it could be (hence the months of fierce debates over track listing and final mixes).

Released in March, 2001 – a month before Burning Shed launched – unexpectedly, Returning Jesus marked a rebirth in no-man’s fortunes. Reviews were surprisingly plentiful (and mostly very positive) and sales were easily the best since Flowermouth in the mid-1990s.

Feeling some of the ideas on Returning Jesus could be taken further, soon after the album’s release and energised by the response to it, Steven and I started work on Together We’re Stranger. Recording for my collaboration with Peter Chilvers – California, Norfolk – also began around this time.

Amusingly, one of the few bad reviews I saw for Returning Jesus was as perceptive as anything written about the album or the band. The journalist/blogger said something along the lines of, ‘I can’t stand anything about this album and what makes this even worse is that it’s obvious the band themselves love it.’ Then and now, the only response I have to that is, ‘Quite right!’