I first came across Radiohead on late night TV in 1993.

They were on a show called The Beat performing a song called Creep.

Unknown at the time, I felt both the track and the band represented a uniquely arty British take on the Pixies loud-quiet-loud formula, while possessing an edge and paranoia that suggested a depth and a quality beyond their influences.

Despite their quirkiness and visible unease, I was convinced I’d seen the next ‘biggest band in the world’.

This was a particularly bittersweet realisation given that No-Man were on the same show.

No-Man’s version of Housekeeping was somewhat ambitious and also not typical of the times, but our (my?) performance seemed second-rate by comparison. I had no doubt that we’d been eclipsed by a band more comfortable in their own skin than we were at that time.

Interested in where they’d go and what they could do, I’ve followed their career ever since.

After the revelation of Creep, Pablo Honey was more conventionally Indie Rock than I was expecting, but there was enough invention, heart and melodic idiosyncracy on the album to suggest something more interesting was to come.

1995’s The Bends was that something as far as I was concerned. 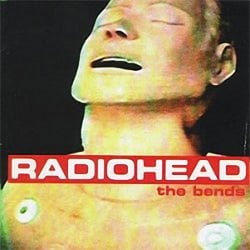 An assured, emotional and thoroughly modern Rock record, at various points, amidst the more typical Grunge-era references, glimpses of an unexpectedly diverse record collection could be heard (Roy Harper, Beefheart, Devoto, Cocteau Twins, Crimson etc). Like many, I was moved by the likes of Fake Plastic Trees and High And Dry and excited by the corrosive guitar explosions in Just and My Iron Lung.

After largely being ignored by the British media, The Bends follow-up, 1997’s  OK Computer,was greeted rapturously by the UK press. It seemed that journalists were making up for what they’d previously missed.

For me, as much as it was a logical and sophisticated continuation of the more exotic aspects of The Bends, OK Computer also provided a further insight into the band’s musical roots (U2‘s Eno-drenched Unforgettable Fire, Kraut Rock, and even hints of early Genesis and Queen). Whether accidental or intentional, the influence of Progressive Rock (Paranoid Android and the very lovely The Tourist) seemed every bit as apparent as the press-approved influences of Plastic Ono-era Lennon, DJ Shadow, Tortoise and Talk Talk.

At the time, the oft-repeated assertion that OK Computer was the first 21st Century Rock album, stupidly served to turn me against the obvious merits of what was an emotionally rich and musically ambitious piece of work. While I felt (and still feel) that the likes of Tricky, NiN, Bjork, Scott Walker (Tilt), David Bowie (Outside), Underworld and 1990s King Crimson and Tom Waits were making more genuinely cutting edge music, my press-inspired rejection of a great album (that I actually liked a lot) was undoubtedly worse than the unquestioning nature of many of the positive reviews.

Cut to the year 2000 and by the time of the electronica enriched Kid A and and its later companion release Amnesiac, Radiohead had truly become an innovative proposition, several steps ahead of the legions of copycat ‘Bends bands’. Perhaps deliberately, Radiohead had also pretty much evolved into everything the reviews of OK Computer said they were. This really was a  21st Century Rock music effortlessly fusing a strong band identity with the possibilities of modern technology.

That these two extraordinary albums reached Number One in the charts was astonishing. That the haunted, off-kilter Alice Coltrane meets Mark Hollis strangeness of Pyramid Song made for the most peculiar Top Five single since the days of Laurie Anderson‘s O Superman and Japan‘s Ghosts was indisputable.

On seeing Pyramid Song performed on Top Of The Pops, as I had been after seeing Creep for the first time, I was dazzled by the band’s wilful audacity.

Since this massive early 21st Century reassessment and re-definition of what a band can be, Radiohead have produced three studio albums (Hail To The Thief, In Rainbows and The King Of Limbs) that, to varying degrees, have seemed to act as a creative bridge between Kid A’s most extreme experiments and their early roots as a uniquely arch variation on the classic Rock band.

In the 18 years since their Beat outing, Radiohead have deservedly become one of the most influential and important major bands in the world. They’re also one of the few Avant Populists who can be considered alongside durable creative mainstream heavyweights such as Pink Floyd, Bowie, King Crimson, The Cure and Eno.

As the jittery repetitions and electronics that kick off Bloom and the haunting melodies of Give Up The Ghosts and Codex testify, this is a band far from satisfied with itself and far from exhausted.

Still questioning, still relevant and still playing with the notion of what songs can be, the music industry would be a far poorer place without them.