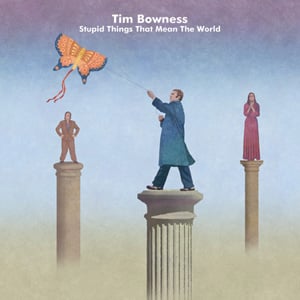 Tim Bowness returns with the powerful and eclectic new album, Stupid Things That Mean The World.

Available as a Double CD Mediabook edition featuring a companion disc of alternate mixes and demos (including an unreleased no-man demo from 1994), a very limited edition, hand-numbered transparent vinyl LP (with CD), and a black vinyl LP with CD (both LPs in gatefold cover).

All Burning Shed pre-orders come with an exclusive signed postcard and a link to a flac download of a 5.1 mix of the album by Bruce Soord (which will be sent out on the day of the album’s release).

Tim has written a new diary entry, with details about the album and some of the songs.