Although his music has audible roots in non-Blues singer-songwriter and avant garde Classical styles, Peter Hammill is one of those exceptional musicians who seemed to come out of nowhere fully formed. 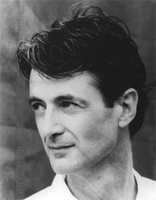 Although vaguely Psychedelic, Folk-tinged and Proto-Prog in parts, few comparisons come to mind on hearing the likes of Afterwards or Into A Game.

On 2009’s Thin Air, the by now 60 year old Hammill was still managing to express himself in contemporary ways with virtually no reference to the outside musical world.

The standard Hollywood pitch (“It’s like Goodfellas crossed with Hairspray. In space.”) would certainly struggle to describe the work of this remarkably self-sufficient artist.

A unique vocalist who appears to have no recognisable Rock, Folk or R&B precedents, Hammill has created a consistently inventive and idealistic body of work that due to its strange passion and passionate strangeness has influenced artists as diverse as Magazine, Associates, John Lydon, Marillion, Marc Almond, The Cure and Theo Travis, in addition to a host of notable Italian Progressives such as Le Orme, Franco Battiato and Il Balletto Di Bronzo.

Sometimes referred to as the Hendrix of the voice due to his undoubted genius for screaming in tune, as the numerous ballads scattered liberally throughout his output suggest, Hammill also has the ability to convey emotions of a more controlled and delicate kind.

With lyrical themes encompassing existential questioning, the impact of science on mankind, the state of integrity in art, and the nature of human mortality itself, Hammill has never taken the obvious ‘moon in June’ route in his songwriting. That said, his collection of almost conventional love songs is an enviably impressive one.

As able to unflinchingly chronicle human relationships as evoke the fragility of the creative muse in the commercial world, as Bill Nelson perceptively said, “Peter has chosen to plough the same deep furrow as all those artists who are driven by something other than the lure of the corn market. In short, he’s the genuine article.”

Along with fellow musical mavericks Bowie, Gabriel, Fripp, Roxy Music, Eno and Nelson, Hammill has been one of the few musicians to have managed to survive often brutal changing times and to appeal to fans of wildly differing musical genres and from wildly differing eras.

Tangentially associated with everything from Progressive Rock, New Wave/Post-Punk and the 1980’s Goth and New Romantic movements (Phil Oakey and Jim Kerr were notable PH admirers), Hammill has found an audience without ever being anything in particular. A rare and admirable feat for a rare and admirable artist.

Hammill’s influence on me:

Being aware that Van Der Graaf Generator had played with Gabriel’s Genesis and that Hammill and VDGG were signed to Tony Stratton Smith’s eccentric Charisma label had me interested already, but John Kerfoot’s glowing notes (on yellow post-its stuck on vinyl sleeves) and Yanks’s cheaper than cheap prices provided even greater incentives to investigate. With £2.50 in my pocket at the beginning of one particular Saturday, I had two albums in my hand by the coming of Match Of The Day.

The first, Van Der Graaf Generator’s Pawn Hearts, was as otherwordly an album as I’d ever encountered. Alongside Yes’s Close To The Edge, David Bowie’s Low and Robert Wyatt’s Rock Bottom, at that stage in my life, it was amongst the strangest and most compelling things I’d come across. Its 45 minutes of Gothic, haunted house atmospherics and beautiful song fragments beaten into submission by lunatic, dissonant riffing held me spellbound and eager for more of the same (a request difficult to fulfil, as it turned out).

By contrast, Hammill’s 1977 solo effort Over, was primarily a sombre account of the end of an important relationship. Musically this was still odd, but was more firmly rooted in a stripped-down singer-songwriter vocabulary. The album’s inherent sadness and lucid personal observations hit home deeply.

Between the ages of 15 and 21, although I had many other (highly varied) musical passions, Over was my favourite album and probably more than any other artist I had in my collection at that time, to mangle a Morrissey-ism, though the DJs may have ignored him, Hammill said something to me about my life.

It’s difficult to imagine now, given how different our vocal styles are, but for my first few (pre-No-Man) years as a vocalist, Hammill’s manic intensity and vocal phrasing were by far the biggest influences on my own style. A deeply unpleasant Goth/Prog/Singer-songwriter style project I called Always The Stranger represented the most extreme manifestation of my interest in all things PH and VDGG. Sensible man that I am, I destroyed all the Always The Stranger recordings I had in the late 1980s!

As over time my interests, tastes and style of singing dramatically changed, Hammill’s influence still remained, but perhaps more in terms of inspiring an ongoing commitment to creating a highly personal and honest music than in any obvious stylistic way.

A Plague Of Lighthouse Keepers, Stranger Still, On Tuesdays (She Used To Do Yoga), Too Many Of My Yesterdays, Man-Erg, The Birds, The Light Continent, The Second Hand, White Hammer, Glue, Patient, After The Show, Your Face On The Street, A Ritual Mask, Afterwards (to name a few).

The ambitious strangeness of Pawn Hearts (1971) still sounds like nothing else I’ve ever heard, while Hammill’s singular forays into the Post-Punk territory, The Future Now (1978) and Sitting Targets (1981) are perhaps the albums I most often play.

Thin Air (2009) and Singularity (2006) are also well worth investigating. Sonically imaginative and typically intense, in some ways, both albums represent a creative response to the near fatal heart attack PH suffered from in the mid 2000s.

Since 2000, I’ve been in semi-regular contact with Peter and have been constantly impressed with how decent a man he is. If his work (and live performances) can be demanding and uncompromising, the man himself is incredibly approachable and friendly.

Given his profound influence on my wanting to create music, it’s been a genuine thrill to both work with him (he appears on a track on the soon to be released Memories Of Machines album) and realise that an object of my teenage affections was as genuinely worthy as I thought he was.