The Krakow experience was even better than I was expecting.

As it was the first time I’ve played in Poland, I was hoping for something wonderful and I got it.

The music came together well and the band had the most enthusiastic response it’s ever experienced. At times, the reactions were overwhelming (in a positive way). 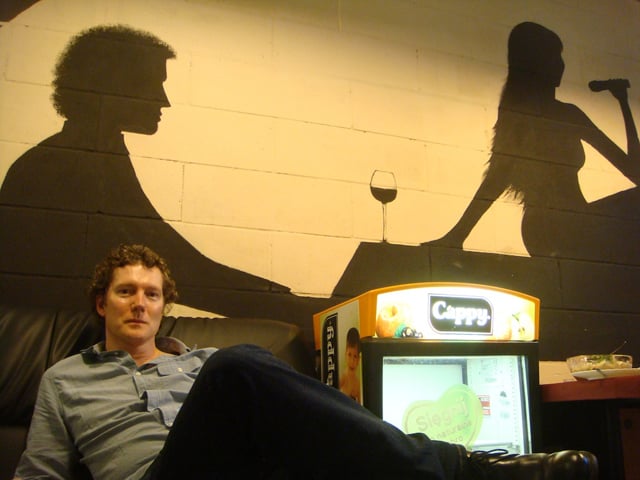 The promoter Piotr and his assistant Konrad were friendly and generous throughout our stay and the during and post-gig fan reactions made the long journey East more than worthwhile.

We had a limited time to explore the city, but what we did see was magnificent. The centre of Krakow was an impressive delight; all picturesque squares and attractive, imposing buildings.

Post-show, I was given presents including copious amounts of delicious E Wedl chocolate and some potent Turkish coffee. At one point during the show we were handed a Polish flag featuring the band’s logo and the phrase, ‘Time Travel In Poland’. Like true natives (or bad Bonos!), Steven and I held it aloft at the end of the gig. Temporarily, our national allegiance shifted!

About an hour or so after the performance, I did an interview with two very nice women from a radio station and the comedy moment of the evening came when all three of us were accidentally locked in the interview room for about 15 minutes after we’d concluded our business. As all we had in the vicinity was a few chairs, a vat of hot soup and an adjoining shower room with no window exit, panic almost ensued! 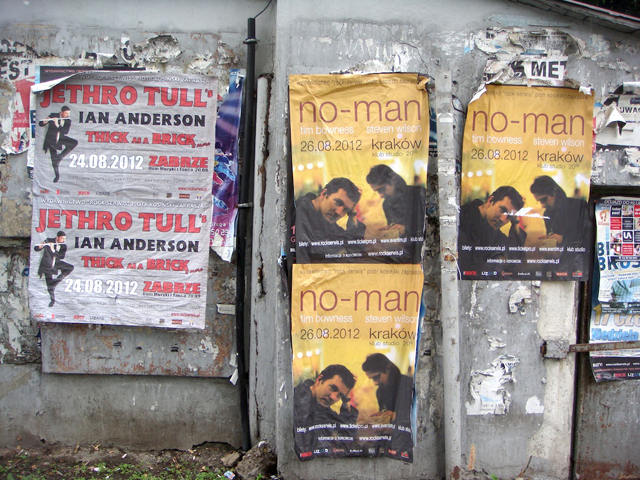 Most of the material we hadn’t played live before came off well. Close Your Eyes and Back When You Were Beautiful particularly hit the spot. BWYWB had seemed sluggish in rehearsals but ebbed and flowed as intended in front of a live audience. The one new song, The Warm Up Man Forever, was better live than in rehearsal. As it was unannounced and no-one knew it, the song inevitably got the most muted reaction of the night, but was good enough for us to feel it deserved at least one more outing.

The intricate Minimalist / Rock mid-section of Lighthouse was a very fine thing to hear as was the gradual, atmospheric beginning to Together We’re Stranger.

Overall, the band gelled in a way that the soundcheck didn’t even hint at.

This was a strong and emotional performance and one that marked the first time the full version of Days In The Trees had been played live since 1993.

During the last few songs, a sweet 5 or 6 year old girl gently danced and swayed to the music. Like most people who’ve heard the song, until this moment, I never knew it was possible to dance to Wherever There Is Light.

The world of music will be glad to know that my encore Death Metal growl was a Krakow exclusive. 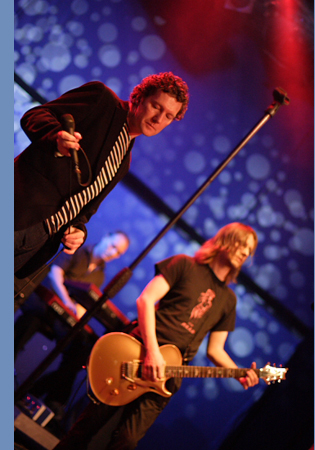 Anticipating feeling a little flat after our time in Krakow, Aschaffenburg proved an unexpectedly pleasant detour. A pretty city on the edges of Bavaria, the streets exuded good health and affluence. Downtown Mumbai this was not.

Close Your Eyes was once more a highlight and along with Days In The Trees, has become something of a favourite for audiences and band alike. The Warm Up Man Forever had more shape and purpose than in Krakow and, this time, went down well. By God, it lives to be sung again!

In answer to my request to know where the Warrington of Germany was, the city of Offenbach received several nominations from the audience. According to the good people of Aschaffenburg, Offenbach is the place Mad Max’s future dystopia was accurately based upon. I liked the sound of it!

Presents came in the form of some fine looking Swiss chocolate. Post-tour, there will be fat!

Inspired by the ubiquitous book and record shop presence of local legends Bap, the comedy element of the Cologne show was very prominent.

Together We’re Stranger and Close Your Eyes were perhaps the best versions played so far on the tour, while Wherever There Is Light and the surprise encore of Watching Over Me also felt good.

Ol’ funk-fingers himself – that is to say, Bootsy Morgan – made some inspired and unexpected Darkthrone noises during a couple of moments in the show. As far as I know, he’s still awaiting the congratulatory phone call from Fenriz.

For my part, I couldn’t find any place to enter or any note to focus on during Beaten By Love, as the root notes had disappeared in a beguiling ocean of atonal washes. In response, I produced an avant-garde noise akin to Stockhausen at his spiciest. Deutsche Grammophon know where to find me, I hope.

Once more, Offenbach was elected as the Warrington of Germany. If the Ofsted reports are good, I now know where to move to!

The post-gig reactions were positive and yet again vocal support came in for The Warm Up Man Forever, with at least one person suggesting we should release it as a single and soon.

As it was the last time we played here, the Zoetermeer crowd was fantastically responsive and encouraging throughout the longest set of the tour so far. The Boerderij staff and management were also a delight to deal with.

The performance, I hope, lived up to this and the Wilson/Bowness ‘comedy banter’ (not a phrase people would associate with no-man, I suspect) was more dominant than ever toward the end of the show.

Close Your Eyes continued its ascent to the top of the no-man live pile. Like its Returning Jesus companion Lighthouse, it’s a song that’s continued to evolve in its live incarnation and has developed into something altogether different from its studio counterpart, while maintaining its emotional essence.

An impromptu encore version of Housewives Hooked on Heroin caused a stir (with listeners and band alike), and although I genuinely enjoyed playing it, I suspect it could be the song’s solitary live outing. We hadn’t rehearsed it, but as I’d continually suggested we play the song (as a joke), the band decided to call my bluff. The result was a boisterous – possibly horrendous – rendition of an unloved Wild Opera piece. Despite (or because of) this, the audience response was ecstatic and the gig ended on a surprising high. 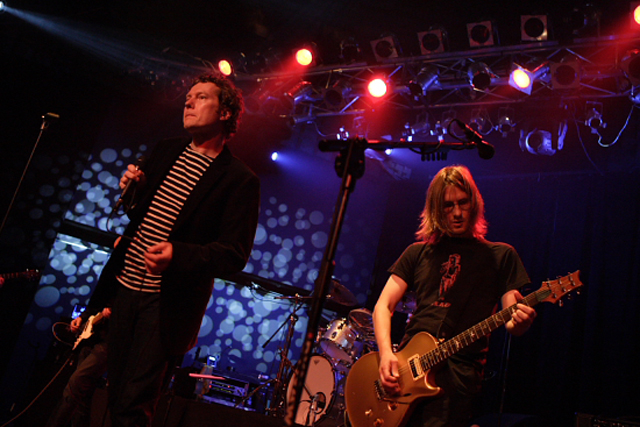 As a performance, this was perhaps the most consistently strong and controlled of the five. The impressive theatre style venue served both to inspire and instil a sense of composure.

The set flowed well and both the playing and extended banter possessed a confidence that I don’t think the band had even a year ago at the Leamington Spa gig.

For me, this has become the definitive no-man live line-up. Onstage and backstage, musically and personally, it works in a way that the band hasn’t come close to in the past. Everyone plays for the song, rather their egos. All the players are good and Steven’s Bingham and Wilson, in particular, are superb soloists, but what counts is that without exception, everyone plays for the band and not themselves.

I’m not sure it matters or whether it’s important in any way, but we’ve also reached a stage where I genuinely don’t know what kind of music it is that we now make. Compartmentalising music as personal and eclectic as no-man’s has never been easy, but at this point, I feel it’s more difficult than ever before to say what it is we do.

What I do know is that it’s the music and the band that has meant more to me than any other I’ve been involved with in my career and that no-man seems as creatively alive now as it ever has done. For me, the band’s atmospheric combination of the intimate and the epic and the sweet and the abrasive is what I’ve been aiming for all along. Although I may have written better lyrics and given equally good performances in other projects I’ve contributed to, I feel that the best of me (musically) is brought out in the context of no-man.

As the final notes faded out at the Assembly Hall, it felt like the beginning of something rather than an end.

With a more balanced sound and in the more sedate surroundings, the quieter music appeared to work better at The Assembly Hall than elsewhere.

The versions of Carolina Skeletons and Back When You Were Beautiful were amongst the most poignant of the tour. Close Your Eyes and Days In The Trees once more worked well and the set placing of Wherever There Is Light seemed just right.

The new song The Warm-Up Man Forever was tight and punchy and, to our surprise, received its best response of the entire tour and one of the best of the night. For those who haven’t heard it, the piece is quite different from most of what surrounds it and most of what the band has done before. Built from a tribal drum riff upwards, its combination of echo guitars, sweeping strings and big choruses places it at the more epic end of the no-man spectrum.

In conclusion, this felt even better than the 2008 mini-tour and was a logical continuation of the Leamington Spa / Love & Endings performance. The behind the scenes support from the Ian, Jason and Big Tim trio was also an important part of why and how this came together so smoothly.

The emotional welcome home from the sweet toddler and the lovely Liz was a perfect way to end a very special week.