Along with Wild Opera, My Hotel Year is the least loved album I’ve ever made and, in some ways, it’s the album of mine I love least as well. 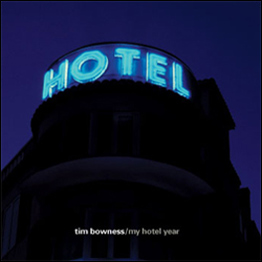 After the airy and atmospheric Together We’re Stranger and in the lull that follows the release of any No-Man album for me, I felt that I had to do something completely contrary to what had gone before.

Out were the drift, the textures and the slowly evolving epics and in were attempts to write tight, structured songs with a sonic toughness and an absence of sentimentality. Clearly, I was giving my inner Northerner full reign!

Ironically, for the only release to come out solely under my name, My Hotel Year has less of my music writing than most albums I’ve been involved in making. Although the vocals, melodies, lyrics and overall direction were mine, I contributed little to the music beyond the simple Blackrock 2000 and the verse chords for Sleepwalker.

Since the completion of Together We’re Stranger (an album I still felt strongly attached to), several projects had been ongoing with seemingly no end in sight. My Hotel Year was born out of a desire to create order from this chaos.

I chose what I thought to be the best of the material I’d been working on throughout 2003 and 2004 – with musicians such as Hugh Hopper, Markus Reuter, Stephen Bennett and David Picking (whose Rhinoceros project I greatly admired) – and, with the help of the elusive Pickmeister and the effusive Baron Bennett, went about re-recording the disparate chosen songs in a focused fashion.

Last Year’s Tattoo, Sleepwalker and Brave Dreams were narrative lyrics that seemed like a more urban version of those on California, Norfolk, while Blackrock 2000 was as close to direct autobiography as I’d ever come (the presence of 1980s band mate Brian Hulse on guitar gave the song an added emotional resonance for me).

David Picking‘s contributions throughout were excellent and, as with his work on Together We’re Stranger, all done remotely. Bizarrely, seven years after first working with him, I’ve yet to meet or even speak to him.

Although 2003-2004 wasn’t a particularly bad time for me, the resulting album seemed lyrically sad and musically monochromatic. No matter what was done to sonically soften the blows, the album had an innate bleakness that seemed to dictate itself. The recording process was playful and productive, but little of that sense of fun was heard in the resulting music. A friend of a friend’s 8 year old daughter declared it, “Music for lonely people,” and she may well have been right.

Conversely, despite arising from a very difficult time in my life, no matter how uncomfortable the album sessions were or how sorrowful the subject matter was, Schoolyard Ghosts seems to me to have an irrepressible sense of optimism from its first to last recorded notes. Sometimes, albums have a will of their own.

After it’s appropriately muted release in late 2004, positive responses came from the likes of composer Andrew Keeling and sitcom writer Graham Duff, and the album’s presence in an Americana Top 10 chart was unexpected and pleasing. However, the best thing to come out of My Hotel Year was the formation of the six piece, My Hotel Band.

For the first time in years, I was working with a live band that had all the power, sensitivity and scope I’d been looking for. Never had so many men made so little noise on such small stages! It was refreshing to move away from the intimate Bowness/Chilvers duo performances without sacrificing subtlety or control, and I felt many of the live versions of California, Norfolk and My Hotel Year songs were improvements on the originals, almost certainly planting the seeds of the 2008 No-Man live band to come. The band’s half hour support to The Bays and co-headline with Richard Sinclair, Sonja Kristina and Theo Travis were hugely enjoyable highlights of this temporary return to live activity.

If I see No-Man as possessing the poetic widescreen ambition of a Terry Gilliam movie, by comparison, I view My Hotel Year as being located in the grimy kitchen sink terrain of Ken Loach and Mike Leigh.

To stretch the metaphor further, if No-Man is a Georgian town house, My Hotel Year is more like a tower block in Moss Side.

Listen to Sleepwalker from My Hotel Year © Tim Bowness

Buy My Hotel Year from The Burning Shed