The following is a slightly modified version of Tim’s introduction for Luigi Ametta’s A Black Bible –  King Crimson discography from 2000: 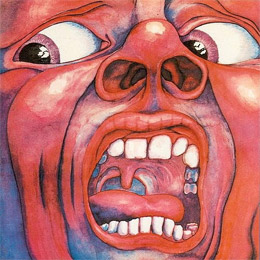 For me it all started when a friend of mine placed me on an uncomfortable chair and forced me to listen to the whole of In The Court Of The Crimson King without interruption. It was late 1978 and almost a decade after the album’s original release, but from first sight of the extraordinary cover to first listen of the complex and contradictory music contained within, I was hooked. Clearly suffering from ‘Crimson fever’, I quickly acquired most of the band’s back catalogue and the King became a firmly established personal favourite. My collection’s prize possession was a supremely warped vinyl copy of the supremely warped Lizard bought for the princely sum of twelve and a half pence from the friend who’d placed me on the chair (his mercenary plan all along, I suspect).

I was drawn to the extremes in King Crimson’s music. The band created a singular sound where beauty and brutality collided freely, as did accident and intention, sweetness and dissonance, and seriousness and playfulness.

Alongside the likes of Jimi Hendrix, The Velvet Underground and Roxy Music, King Crimson is one of the truly original sonic archetypes of Rock and has influenced generations of aesthetically diverse artists from the epic Prog-stylings of Steve Hackett to the Post-Punk abrasiveness of Magazine to the outer reaches of Trance music (The Orb), the ‘Art’ Metal of Tool and the avant-garde experimentalism of Paul Schütze and Erkki-Sven Tüür. Each generation of the band has consisted of a dream team of players that would feature in countless favourite band lists regardless of genre.

Throughout its career, King Crimson has laudably attempted to challenge notions of itself, both externally and internally. It’s almost impossible to imagine any other band of its generation having the ability or inclination to play so freely with the preconceptions heaped on it, or to put band members’ collective egos on the line in a similarly fearless manner to the recent ProjeKcts series of experiments.

Long live the King, and long may it continue to inspire and annoy! 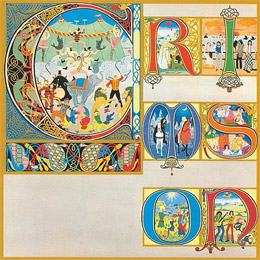 Postscript 1: Even amongst King Crimson fans, Lizard is considered a strange album. Seemingly unloved by Robert Fripp and actively criticised by singer Gordon Haskell, for me it’s always been a favourite. A weird outsider fusion of twisted Jazz flourishes, Classical grandeur, mutant Rock’n’Roll guitar runs and truly lyrical vocal and wind melodies, it was one of the albums Steven Wilson and I bonded over when we formed no-man. Unlike anything else released at the time and at odds with the rest of the band’s catalogue, Lizard possessed a jerky quirkiness that made it one of the very few albums I’d pore over and wonder, “How the Hell did that happen? Why the Hell did that happen?”

Postscript 2: No matter what type of band I’ve been in, through the years King Crimson has been one of the few constants beloved of most musicians I’ve worked with. Players I’ve known from Pop, Punk, Prog, Metal, Folk, Jazz and Classical backgrounds have expressed an enduring love of at least one period of the band’s music. King Crimson has always maintained a particular aesthetic in its music, but the arrangements, production and instrumental line-ups have varied dramatically. I love all periods of the band’s music, but the two that most appeal to me are the first four albums and the 1980s trilogy. The first four are gloriously expansive and possess a melodic fragility and a growling intensity that set the template for much of what followed. The stylistic contrasts in the 1980s incarnation are less obviously pronounced (the band’s sound is pure and remarkably coherent), but they’re still there, as its streamlined approach manages to encompass Minimalism, Funk, Art Rock, Afro-Beat, No-Wave, Gamelan and much, much more.