Lost in the Ghost Light, the 4th solo album from Tim Bowness, is available to buy (CD & vinyl) and stream on all major platforms. The Spotify stream is available here.

Purchases of the album from Burning Shed before Midnight on the 22nd February 2017 will receive a free download of Songs From The Ghost Light – which contains alternative versions of songs intended for the concept.
The continuous download file comprises: 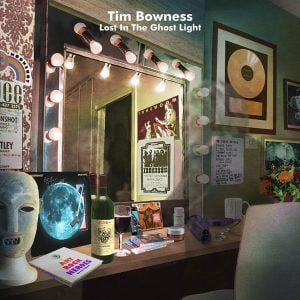 Tim has released a new video for Kill the Pain That’s Killing You. Tim said:

“Kill The Pain That’s Killing You is definitely the odd one out on Lost In The Ghost Light. It’s the angriest piece on the album by far and it depicts a point when the musician Lost In The Ghost Light concerns is spiralling out of control in terms of both his family life and career. In basic terms, it’s a hellish account of a night on the town mid-tour, while his wife is having an affair back home. It’s also chronicling how music is in the background at this particular point in his life.

Bruce Soord’s brilliantly manic lead guitar lines are supported by a fine David Rhodes riff, and a frenetic Colin Edwin/Andrew Booker rhythm section. On top of that, Andrew Keeling’s flute and string quartet arrangements take the piece into some interesting and unexpected territory, I think.”