Recorded in the Summer of 1993 and released a year later, Flowermouth was the album that almost brought No-Man’s career to its knees, while simultaneously giving us the courage to carry on. 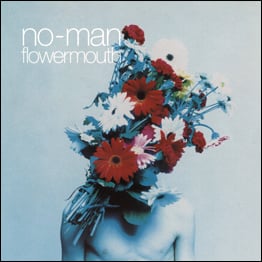 Although we’d liked many of the songs, we felt the previous year’s Loveblows And Lovecries had been slightly compromised by a number of external and internal pressures, so this time we were determined to make an album that totally reflected our idea of what No-Man was.

A key moment in shaping the spirit of the album (and maybe even our subsequent career) came when, during the making of Loveblows & Lovecries, we were asked to release a single we didn’t want to and told that we’d soon be doing whatever we could to write hits and make money, because that’s what everybody else did. We disagreed.

Declining offers of big studios and outside producers, we spent the recording advance on a then state of the art digital studio and on musicians who we felt could help us more fully realise the new music we’d written.

Much to our amazement we heard, via our publishers Hit And Run, that Robert Fripp had said he liked our debut album. He had added that it would have been even better had he been on it. We agreed.

Plans were immediately put in motion to get the legendary Crimson King into Nomansland. After hearing a sample of Mel Collins that we’d used on the Teardrop Fall demo (from the track, Lady Of The Dancing Water), Robert suggested Mel‘s involvement in the project. With the memory of his excellent Miles Davis biography and his haunting solo on Nico’s Camera Obscura fresh in our minds, we luckily managed to track down the late, great Ian Carr – without the aid of a private detective. Steve Jansen and Richard Barbieri had previously worked with No-Man on tour and in the studio, and it was a delight to us that they were willing to come back for more.

All the musicians involved in making Flowermouth brought vital contributions to the music, proving that quality and pain needn’t necessarily go hand in hand. Ben Coleman‘s distorted violin solo at the end of Things Change (commonly mistaken for a guitar part) remains a No-Man highlight for me, and the effortless musicality of Fripp and Collins throughout the sessions was incredible to witness in the here and now. Robert’s eerie Soundscapes coda to Simple was thrilling to hear in real time and the small room that was Nomansland seemed to reverberate with the graceful intensity of his playing long after he’d packed his guitar away.

Lyrically, the album partly documented the alienation I’d felt moving to and living in London (after spending all my life in the North of England, that there South still felt mighty strange), and partly echoed situations I’d either observed or experienced firsthand. Regardless, as with the debut album, disillusioned romantic impulses were high on the agenda!

After the predominantly electronic and beat-driven adventures of Loveblows & Lovecries, Flowermouth felt like a more languid and introspective affair by comparison.

Angel Gets Caught In The Beauty Trap began life in 1989 as an attempt to fuse Classical Minimalist, ECM Jazz, Ambient and reflective singer-songwriter concepts. Completed during the Flowermouth sessions, the song had undergone enormous changes in its four year gestation (at one point, being a 3 minute piano dominated ballad and at another being a 20 minute synth-drenched suite), but, for me, the finished version remains the most convincing (so far). The song’s title came to me while watching Polanski’s Tess Of The D’Urbevilles, triggered by the moment when Angel Clare first catches sight of Tess (played by Nastassja Kinski).Still a favourite of mine, Things Change took the implied Classic Rock influences in Painting Paradise to a whole new level of excess, while Shell Of A Fighter and Simple seemed to me to be extending and disrupting the melodic electro-poppish nature of Loveblows & Lovecries.

Watching Over Me and Teardrop Fall started life as straightforward songs that I’d written on acoustic guitar. Put through the Wilson production mangle, they became something different and altogether more exotic.

The process of making the album had been a joy, but what followed was less pleasurable by far. On the day of the album’s release, we were told that the promotional budget had been scrapped and that the proposed single and Michael Bennion directed video (for Watching Over Me) weren’t going to happen.

What we’d hoped would be our brightest moment turned out instead to be No-Man’s darkest hour (or darkest five years, if truth be told).

The reviews for Flowermouth were mostly very positive. In Italy, the album garnered Album Of The Month accolades in its big magazines, and in the UK, the great Fred Dellar commented that Angel Gets Caught In the Beauty Trap sounded like Nick Drake gently crooning over a Chill Out rendition of Tubular Bells. Better still, he didn’t mean it as an insult.

Some good word of mouth meant that sales were a marked improvement on our previous releases. Sadly, not enough of an improvement to keep the interest of Hit & Run, Epic/Sony (US) or our manager. For our industry supporters, what had started out as a proto-Trip Hop/Indie Dance band with ‘crossover potential’, had mutated into a purely studio-based Art Pop/Art Rock extravagance; not the smartest recipe for success in the age of Brit Pop.

One Little Indian were willing to keep the band on, but for obvious reasons, the levels of support we’d known, would no longer be forthcoming. Four years of favoured treatment gave way to a rather longer period of self-management and creative reassessment.

For me, in the light of No-Man’s subsequent work, Flowermouth seems somewhat self-conscious and over-produced. However, the musical climaxes to Simple, Shell Of A Fighter and Watching Over Me, and the emotional nature of Things Change, Angel and Animal Ghost, sound as genuine to me now as they did when we recorded them.

Inevitably, there are things I’d do differently now, but as a statement of integrity that provided an idealistic starting point for what was to come, Flowermouth is an album I’ll always be glad I had a part in making.