Thus ends another year with no major releases and only a handful of gigs to my name (more of which later).

Rumours of a descent into chronic alcoholism, daytime TV addiction, and a forthcoming Bowness/Chilvers Justin Bieber tribute act have all been greatly exaggerated.

Both in personal and musical terms, gestation is the word that best sums 2010 up for me. Most of the year has consisted of long hours (days, weeks, months…) of waiting and constantly refining.

Undoubtedly, the biggest personal news was that my partner and I had a child (a first for both of us) in mid-October.

The experiences leading up to the birth and the period after were ones of genuine joy and discovery, but also possessed the inevitable anxiety and self-questioning that accompanies such a monumental event.

Although aspects of fatherhood may creep into my lyrics, it seems highly unlikely that ‘Babystyle Oyster – The Concept Album’ (incorporating ‘The Tummy Tub Overture’) will ever see the light of day.

The year in gigs started off in February in Norway with Judy Dyble, The Curator (ne Megabonce) and some mighty fine Norwegian Jazz players who came to us via the wonderful Termo Records people.

Three short performances on Breakfast TV, late-night TV and daytime radio were hugely enjoyable, and hearing the songs performed with a simple but effective line-up of grand piano, saxophone, flute and double bass was a genuine thrill.

Elsewhere, sharing a bed with Lars Frederik Froislie‘s Mellotron was an unexpected delight.

The new quartet co-headlined the Tonefloat festival in Holland and played a set at the Estonian Embassy, and it seemed to all of us that the Samuel Smiles concepts of fusing singer-songwriter intimacy, textural experiment and Jazz spontaneity had rarely sounded better.  The immensely talented Maestro gave the band a fresh confidence and also very effectively blended his Classical Minimalist influences into the existing musical mix.

The year in gigs ended in early December, when Lord Chilvers and I joined forces with Estonian Jazz duo UMA to play two performances (in Tartu and Tallinn) as part of the Estonian Jazz festival. 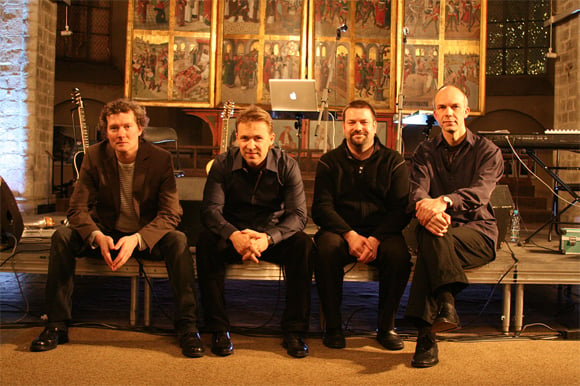 These were preceded by a private performance in a country home 30 miles outside of Tallinn. Playing to a select audience of 80 people, it was obvious from the first notes that we’d hit on something interesting.

The ‘straight man’ songs of the Bowness/Chilvers partnership effortlessly merged with the tasteful atmospheric Jazz of UMA, creating a sort of ECM-ised rendition of California, Norfolk.

Performance highlights included the lengthy 5/4 groove piece Criminal Caught In The Crime, the resurrection of Also Out Of Air, and extended takes on Days Turn Into Years and Towards The Shore.

The hope is to continue to perform with Robert and Aleksei and to properly record the results sometime in 2011.

Tallinn was as fairy tale pretty as I’d hoped it would be, especially in the snow (at minus 12!). Tartu was more austere and even colder, but equally picturesque. 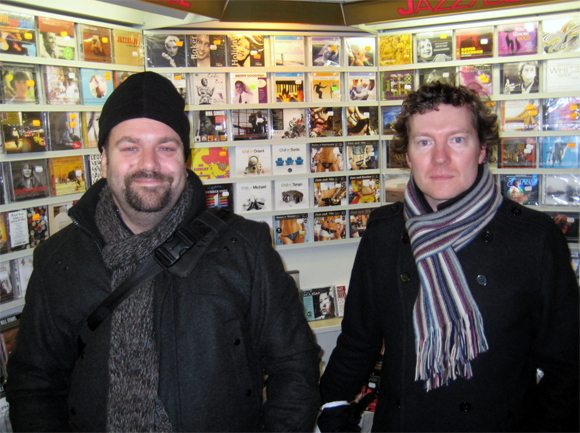 The memorable trip also included being given a guided tour of Tallinn by the marvellous Dr Margus Laidre, and Peter and I being accosted by a man uttering the immortal words, ‘Gentlemans, I show you the ways to beautiful womens.” We politely declined his kind offer by saying that we had, “Beautiful womens of our owns.”

Recent sessions have included singing with UMA, Stuart The Drum and UXB, while a White Willow guest appearance has produced a haunting song which might possibly be my favourite of the bunch.

Giancarlo Erra and I finally completed the Memories Of Machines album in late November (four and half years after we started!).

Beautifully mixed by the gifted Mixmaster Wilson, the album sounds more substantial and rich than before. Featuring several excellent guest performers, the album bears comparison with the recent work of No-Man, while definitely having a strong identity of its own.

More organic and more Rock-orientated (in an atmospheric, almost Floydian way) than my typical output, several of the songs contain the most optimistic and soaring melodies I’ve come up with since Flowermouth. That said, the album closes with two uncompromising Chamber Classical / Ambient hybrid pieces. The most recent, Lost And Found In The Digital World, contains a hypnotic Robert Fripp Soundscape.

Excited by the album and with a new, highly promising, record company deal very nearly in place, Giancarlo and I are hoping to take MoM on ‘the road’ sometime next year.

The one bit of 2010 No-Man activity involved me visiting the all-new, all-swanky Nomansland 2 to do some more work on the ever-evolving Disco Epic, Love You To Bits.

The piece now features some interesting additions from Pete Morgan (in his funked-up UXB guise) and yet more extra Bowness/Wilson input.

The lyrics have expanded enough to cover the whole of a triple gatefold vinyl album (in small print!), but as with the song in general, I suspect that there’s going to be a whole lot of pruning going on over the next year (or two).

16 years on and we might just be over halfway to completing this most elusive of No-Man compositions.

As reported last year, the Plenty album was 92% complete by late November 2009. This year’s update is that it’s 95% complete this December.

Ditto, albums by Postcards From Space (with The Curator), and Henry Fool.

Add to this the fact that I’m considering releasing a limited edition album of my demos from the last five years, and after only releasing 3 full-length albums since 2004, 2011 (coincidentally, Burning Shed’s 10th anniversary) may bring an unexpected avalanche of Bowness related material.

Run for the hills.