The October 14th No-Man live performance at the Leamington Spa Assembly has been an inspiring highlight of 2011 so far.

As confident and hard-hitting as any show I’ve ever been a part of, from the first rehearsal onwards it was clear that the band had recaptured the essence of the 2008 Mixtaped performances, while also managing to expand the dynamic and emotional range of the music. It was louder, quieter and more focused than before and reminded me of how much I love No-Man’s music and how thrilling being part of an inventive Rock band is. 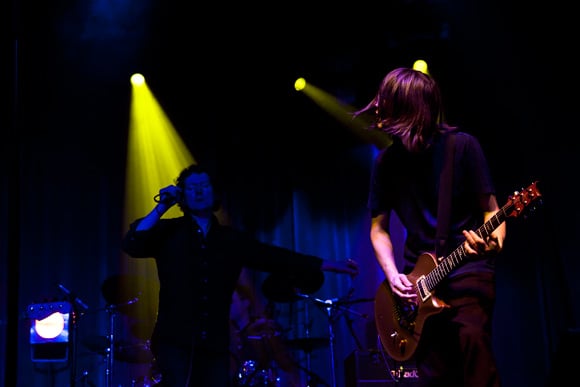 Due to the predominantly discreet nature of a lot of what I do, finding the balance between being true to the essence of the music and creating a performance that communicates to an audience can be difficult.

Using backing tapes and Ambient linking sections, the first No-Man gigs in early 1989 were much like performances I’d been a part of in Liverpool and Manchester with Still and Plenty earlier in the decade.

The band’s live sound was in keeping with its studio recordings, but the lack of flexibility and dynamism meant that if the music didn’t click with the crowd or if the venue wasn’t right, things fell apart quickly and stayed that way for the duration of the set. Consequently, one in two gigs worked (as the audience bought into the band’s rarefied moods and Ben Coleman’s stunning playing) and one in two ended in the likes of Days In The Trees climaxing to deafening silence.

With the departure of former Still guitarist The Still Owl in late 1989, Steven moved from keyboards to fretboard and in the process brought a toughness to No-Man’s music that had previously only existed on a select few studio outings. The backing tapes were still in place, but this short-lived trio incarnation of the band had a fiery intensity that transcended the limitations of the programmed beats and electronics. Ben’s playing was impressively energetic and ornate, while Steven developed a brilliant wah-wah guitar technique and played some wonderfully inventive solos.

Between 1990 and 1993 (initially augmented by Jansen, Barbieri and Karn, and then by Silas and Chris Maitland), No-Man evolved into a potent groove-driven live unit that had the ability to honour the poignant character of its songs while also being able to win over sceptical gig-hardened audiences. A subtlety had been lost, but the bliss-out noise finales to songs such as Housekeeping, Sweetheart Raw and popular set closer Swirl were the gains that made this loss bearable.

By 1993, No-Man’s studio material had become more complex and delicate and Porcupine Tree had emerged as a powerful live band with a growing following. 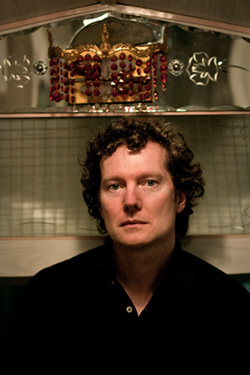 Waiting for the right venue and moment, 15 years passed before the next No-Man gig.

I was genuinely excited by the three performances in 2008 as I could see how a live No-Man could not only exist again, but also creatively thrive and inspire another change in the band’s sound. More overtly Rock and more overtly Minimalist Classical than anything I’d previously done, the very different versions of old No-Man songs contained core elements of the band’s identity (the melancholy, the romanticism, the violin, the return of the ‘bliss-outs’), while suggesting something fresh (organic band interplay, Hard Art Rock, whisper to a scream dynamics).

The Bush Hall gig was incredible in terms of atmosphere and audience response, but due to nerves, over-rehearsing and the onset of a cold, I gave one of my weakest vocal performances of recent years.

The following gigs in Holland and Germany featured much better band performances and by the last date in Dusseldorf, everything clicked in a way that suggested this was a live project worth taking further.

Waiting for another opportunity to do so, 3 years passed before the next No-Man gig.

Rediscovering the joy of noise, while remaining respectful to No-Man’s identity, the 2011 band chemistry was just as strong and with simpler keyboard and drum set-ups, the music sounded even more dynamic and flexible than in 2008.

In a live context, Things Change, Lighthouse (with a restored vocal mid-section) and Mixtaped seemed immense in their sonic scale, while the intimacy of Wherever There Is Light and My Revenge On Seattle remained intact.

Although Steven’s epic sound and Maestro Bingham’s virtuoso solos were deservedly singled out for praise, for me, it was the cohesion of the band as a whole that made the Assembly performance so special. Andrew Booker’s unintrusively intricate drumming was a vital ingredient as were the well judged contributions from Morgan The Bass, Doctor Bearpark and Baron Bennett.

Musically and in terms of the enthusiastic audience reception, ‘the return of the Man’ was a uniquely energising experience for me and one that I hope happens again before another three years has passed.

Plans for a live album and for re-recording some material with the No- Man live band are currently being discussed.

No-Man’s 25th anniversary is shaping up to be a memorable one.

The ‘other’ Burning Shed 10th anniversary event in Norwich was a more muted affair both in terms of attendance and musical content.

Slow Electric’s live debut was mixed, with a slightly faltering beginning (due to technical issues) morphing into a very fine conclusion.

A new piece, The Boy From Yesterday, worked surprisingly well, while versions of World Of Bright Futures and Days Turn Into Years were full of nicely nuanced performances.

As with the Estonian gigs, the band communicated effortlessly. Joined by Captain Morgan The Bass, the sound seemed even more complete than it did in Tallinn in 2010.

With possible dates in the former USSR being considered, the SE adventure looks like it’ll be an ongoing one.

My two 2011 album releases, Warm Winter and Slow Electric, differed stylistically, but were similar in the way that they seemed to mark a coming to fruition of particular areas of music I’ve been involved with over the years.

Both albums may be amongst my least radical statements, but I feel that they’re also amongst the most satisfying albums I’ve been a part of making, with both exhibiting a strong sense of confidence and accomplishment.

The overwhelming majority of the reviews and responses to Memories Of Machines’ Warm Winter were as positive as I’d hoped for and the album appears to be reaching people beyond the expected No-Man / Nosound circle of interest.

Conversely, Slow Electric (which I think represents a more assured continuation of the spirit of Bowness/Chilvers and Samuel Smiles), has had some excellent fan reactions, but virtually nothing else.

Disappointing perhaps, but as my main sense of satisfaction comes from making music and releasing albums I’m personally pleased with, it’s a minor setback for what I hope will become an evolving long-term project.

Outside of these albums, Kansas Regrets, my collaborative song with White Willow appears on their extremely fine new album Terminal Twilight, and I’ve recorded two pieces with Andrew Keeling. One features a lovely string arrangement and both highlight Andrew’s excellent acoustic guitar playing. A video for Kansas Regrets is currently being made by Dion Johnson who did some fine work for Slow Electric’s Towards The Shore.

Elsewhere, I’ve been enjoying the process of revisiting old songs – both released and unavailable – and re-writing / refining lyrics. Some pieces have become richer and closer to their intended meanings as a result of this retrospective tinkering, the main object of which has been to more fully realise text that now appears to me as underwritten or unclear. 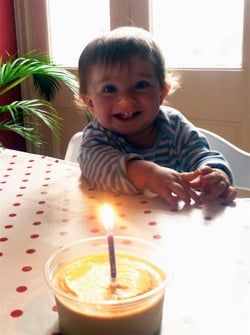 Sam, the sleep-fighting man, had his first birthday a few days before the Assembly performance.

Ushering in a year of massive change, his sweeter than sweet presence has become a life-enhancing part of my and my partner’s everyday experiences, while also painfully highlighting the fragility of life and the all too rapid passing of time.

With joy and poignancy existing side by side on a daily basis, the bittersweet nature of the music I make is unlikely to change sometime soon.

For now, the uplifting Pampers Concerto in D Major is on indefinite hold.

VDGG were perhaps more insanely driven than at any time I’d seen the band previously. Playing new and old songs with equal enthusiasm and abandon, VDGG’s third coming seems to have been revitalising for all concerned.

The band’s new album is amongst its most demanding and best and it was good to see this being acknowledged by an enthusiastic audience of all ages.

PG’s New Blood show was beautifully staged. As a voice, he remains as unique and compelling as ever. For me, the album works less well than the shows, but it’s always exciting to see artists of a certain vintage find new ways to express what they do (Scott Walker, Neil Young, Joni Mitchell, Robert Fripp, Brian Eno, Brigitte Fontaine and the late Alain Bashung also fall into that category for me).

I was sad to hear about the deaths of the extremely gifted Mick Karn and of Steven’s father. Both were rare individuals. That Mick didn’t survive to see an inevitable rise in the fortunes of his music was extremely cruel, as was his untimely loss to his wife and young son. The forthcoming Dali’s Car EP will make for a fitting swansong for a unique musician I’m proud to say I worked with.